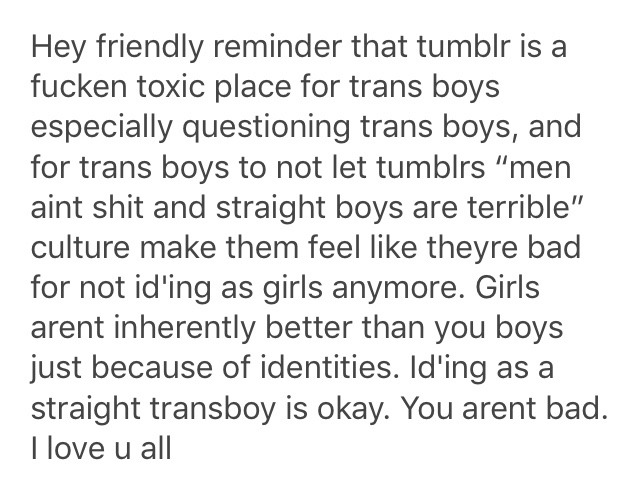 Followed this trans positivity blog, saw this, unfollowed. Saying men suck isnt transphobia it’s expressing outrage against sexism, society loves men, society does Not say girls are better than boys holy shit what world do you live in and why do you hate women

“All men suck” can sometimes be a valid thing for someone to say when they are really mad!

But it’s also understandable that having it be a common statement and an agreed-upon-belief in one’s community might make a male-identifying person feel bad about themselves. In particular, I’ve heard of some cis women actively discouraging trans men to stay women or to disavow their male identity because the cis women believe that all men suck. This is a really bad thing to do and it arises from Othering men.

I don’t think it’s structural oppression of men by women. I do think that hating and Othering men can be harmful at a local level to individuals.

I also think that the patriarchal society we live in encourages gender essentialism and oppositional sexism: that is, it encourages women to hate men and men to hate women. It’s not particularly radical for a woman to say that she hated men. For this reason alone – for the sake of avoiding sexism and binaryism- I think that Othering men should be discouraged.

If saying “men suck” hurts a man’s little feelings then he needs to analyze his own sexism and the way he contributes sexism to society and subconscious bias against women and the idea that He’s One Of the Good Ones, Never A Misogynist

I warn for misandry cw for a variety of complicated reasons.

I don’t like your lack of care for men’s “little feelings”. Care to explain why men’s feelings aren’t important to you?

I think that it is important for men to recognize the advantages society gives them over women, and to recognize that anyone, including themselves, could be acting in sexist ways. Women, as well as men, contribute to sexist norms.

I absolutely agree that saying “men suck” is sometimes valid, and that if said in a moment of anger or frustration it is definitely excusable.

On a larger scale – perhaps on a community scale – when this is a commonly held and commonly repeated belief, it might end up making trans men afraid to come out or it might make a community more hostile to trans men. This is harmful to trans men because, yes, it hurts their little feelings.

Such a situation might be harmful to cis men. Belittling men’s concerns and looking down at men might make people unfairly dismiss or sneer at both cis and trans men. It might make people care less about legitimately sad or vulnerable men, which means that patriarchal standards for men are reinforced, not challenged. This is bad!

Sexism teaches women to hate men. This is bad because it’s a traditional part of sexism, and because it relies on ideas of maleness and femaleness are opposite and opposed to each other. This idea is transphobic and binaryist; it also contributes to sexist assumptions about what women can do or what men can do. I think that this is bad and that feminsts should try to avoid spreading these kinds of ideas.

As a trans man, I can confirm: I was pressured to identify as a different gender, because Masculinity Is Bad + Men Are Orcs rhetoric was rampant in the first ‘real’ trans community I was in.

As a woman who really doesn’t fit in with other women and has been punished for it viciously from a young age, it gets to me too. I have had it made abundantly clear to me that I don’t belong in the Sisterhood and there is a hell of a lot of “women are like this, men are like that” things where I end up identifying more with the male thing, from not feeling scared to walk home to watching mainstream porn to thinking Die Hard is great. So when I see “men are trash” I’m thinking “do they mean that men are trash by virtue of having penises/identifying as male/etc, or do they mean men are trash for not being like women”. Cause if it’s the latter, I know I’m included. I’m included when it’s about men talking too much and I’m included when it’s about men liking Hemingway. I don’t think “oh, I’ve got a vag so I get a free pass automatically”.

I’m another trans man who can confirm that I did not – and still do not – want to be a man because of this shit. No, I’m not talking about a discussion of sexism and the ways men tend to perpetuate it. I’m talking about statements that men are all gross and horrible and inherently bad. And women are pure and wonderful and good and have some kind of magical sisterhood.

My biggest internal struggle when it comes to being trans is accepting myself as a man. Not as a trans person specifically. But as a man. Yeah, my biggest external struggle is with transphobia, but internally … I can usually accept that I’m trans. What I can’t accept is that I’m a man. I want to be a woman and a lesbian and be Good and … I don’t know. I miss when I thought I was a woman and a lesbian. I was Good. And now I’m not.

I learned to hate men and it backfired when it turned out I was one.

Was I intentionally cultivating that hatred in order to not admit I was trans? Maybe. Because when I realized that a) I was attracted to men, and b) men were not inherently gross and horrible, my first thought was “oh fuck. I don’t have an excuse/reason for why I’m not trans now. fuck fuck fuck. I am so fucked.”

But that attitude still did exist and was not entirely made up by my own imagination.

When you make those statements about men remember that privileged men aren’t the only ones hearing it. Not that I think it’s okay to hurt them either. And yes, I know privilege is not a binary thing and that someone can have male privilege and not other privileges. It’s just –

You’re saying these horrible things to trans men, to Black men, to other men of color, to disabled men, to autistic men, to depressed men, to other mentally ill men, to gay men, to men who are abuse survivors, etc … these are men who may not feel great about themselves, and this feeling may intersect with their maleness, too. Like disabled men feeling lesser if we can’t do what patriarchy says we should be able to do.

It seems contradictory to me to say things that support those groups, and then with the same mouth/keyboard say that roughly half the people in those groups are disgusting scum.

Again. I’m not talking about a discussion of misogyny and how men perpetuate it. But an attack on who men inherently are as people.

It’s not even feminist, because if you say men are inherently bad, then you are saying that we can’t help behaving terribly.

Misandry is not a structural oppression the way misogyny is, but it exists and it definitely hurts some of us. For awhile I thought it was just me. Like my situation was really unique, and also maybe it was my fault. People didn’t mean that, it’s just that I took it the wrong way to avoid realizing I was trans.

But now I’ve seen that I am not the only one, I am not crazy, I did not inflict it all on myself, and in fact, lots of us were hurt by this. And I am not going to accept that we should just be your collateral damage or whatever.

Saw this literally on my way to talk to my therapist about how this internalized misandry hurts me as a trans man. And how I’d never seen anyone talking about this. If I started that conversation I was afraid I couldn’t do so without hurting women (if only by starting a conversation that could be coopted by MRA types). I love women and want them to be empowered, I platonically adore lesbians—but when I’m on tumblr it’s hard not to feel like y’all hate me.

(Also how the f*** am I supposed to have experienced male privilege when society at large and almost everyone I know still thinks I’m a woman.)