Design a site like this with WordPress.com
Get started
Skip to content
acemindbreaker Uncategorized November 14, 2018November 21, 2018 1 Minute 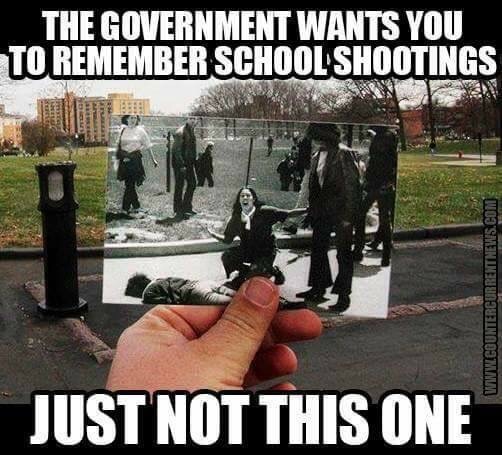 “The Kent State shootings (also known as the May 4 massacre or the Kent State massacre)[3][4][5] were the shootings on May 4, 1970 of unarmed college students by members of the Ohio National Guard at Kent State University in Kent, Ohio during a mass protest against the bombing of Cambodia by United States military forces. Twenty-eight guardsmen fired approximately 67 rounds over a period of 13 seconds, killing four students and wounding nine others, one of whom suffered permanent paralysis.[6][7]”

“There was a significant national response to the shootings: hundreds of universities, colleges, and high schools closed throughout the United States due to a student strike of 4 million students,[10] and the event further affected public opinion, at an already socially contentious time, over the role of the United States in the Vietnam War.[11]”

Student strike of 4 million students! Let’s do that again lol

Another picture from Kent State.

But it was not just Kent State, eleven days later Mississippi Police fired 150 rounds into a dormitory at Jackson State College, killing 2 and wounding 15 black protesters.

Btw half of the students killed at Kent State weren’t even protesting, they were just there

What in the absolute fuck

When the Irish guy has known about this since he was like 8, but it’s suspiciously hard for Americans to learn about…

I only had a vague idea of what this was and what happened until I did my own research on it.

We glossed over this in my history class. I think my teacher made us listen to that one song by Neil Young or whoever it was, that was about the Kent State Shootings.